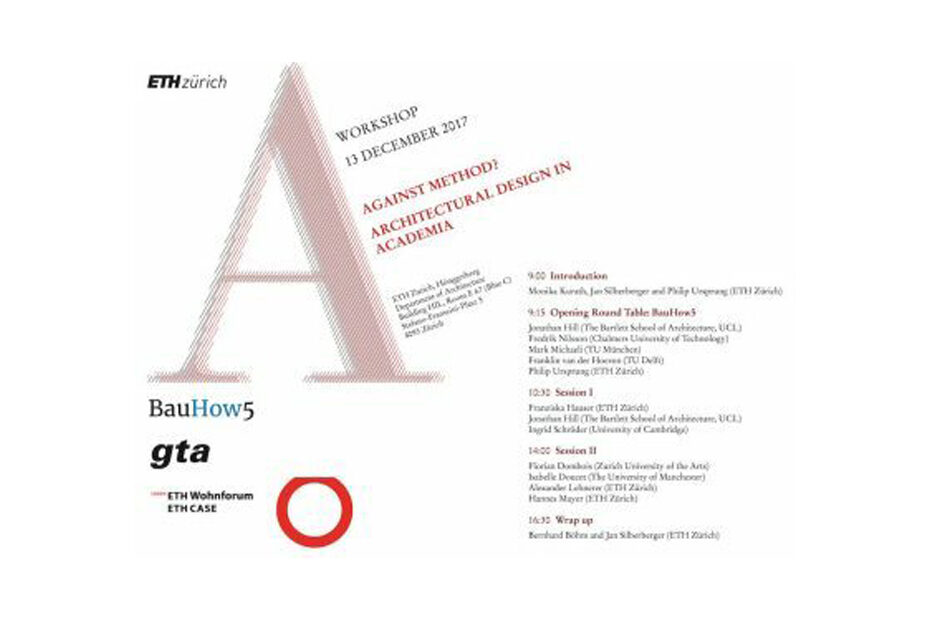 Against Method? Architectural Design in Academia

December 13, 2017. In contrast to traditional ‘hard science’ disciplines, knowledge production in architectural design can be characterised by a traditional orientation on skills, handcraft and artistic practice, by ideals such as individuality, singularity and non-reproducibility as well as by an absence of a community-wide shared pool of codified references (Ammon & Froschauer 2013; Kurath 2015). The ways and practices of generating knowledge in architectural design most of the times relate to the development of a particular solution to a (site-) specific task or problem at hand – and attempts to deduce reproducible, universally applicable answers, insights or theories from this site-specific problem-solving approach are often frowned upon. At a rough glance, it seems that currently, only very few architects working within the academic realm undertake the exercise of generalizing on the basis of the cases they study thereby aiming at generating or increasing the transferability of their findings.

This, however, has not always been the case. In fact, during the 1960ies the effort to systematize design was so common among practitioners that people even spoke about a ‘movement’ – the so-called design methods movement – which not only led to a series of widely regarded conferences but also to an abundance of accompanying textbooks (see e.g., Asimow 1962; Hall 1962; Alexander 1964; Archer 1965; Jones 1970). Yet, in the early 1970ies, this design methods movement began to be heavily criticised, primarily for its mechanical conceptions, and broadly rejected – also by some of its early pioneers. The following decades then saw only a minor academic interest in design methodology. Even prominent publications such as Schön (1983) introducing his concept of reflecting-in-action, Cross et al. (1992; 1996) with their account of the specific intellectual and practical culture of design or Simon (1996), who elaborated on the systematization of decision-making approaches in design, have only had little influence on the self-conception, research and curricula of architecture departments.

Only recently, a renaissance of an interest in the methodological aspects of architectural design can be observed – both, from within the profession as from an external perspective. Tying in with approaches put forward by the design methods movement current studies conducted by architects and designers re-examine the practice of designing – again, with the aim of developing theoretical concepts that allow for facilitating design-based modes of decision-making (see e.g., Fezer 2009; Gethmann & Hauser 2009; Mareis et al. 2010; Schoper 2010; Mareis 2011). In addition to these ‘studies from within’, several studies that analyze architectural design as a process of knowledge creation from a social science perspective have emerged over the last ten years. Taking up an ethnographic approach in the notion of Science and Technology Studies (STS) based laboratory studies (Latour & Woolgar 1979; Knorr Cetina 1981; Traweek 1988), these ‘studies from the outside’ provide descriptions of instances of knowledge production as architects, for instance, use models of different scales
(Yaneva 2005), combine multiple viewpoints and create controversial visual representations (Farias 2015) or engage in sociomaterial arrangements both inside and outside the office (Houdart 2008).